Sometimes the best way to learn about what is normal is to study that which is abnormal. Certain neurological disorders and conditions can give us clues about the characteristics of a normally functioning brain. For example, dyslexia is a condition in which certain letters or numbers appear flipped or jumbled which makes reading a hassle for dyslexic people. When this was discovered and studied, processes were developed to help dyslexic people overcome their condition and read “normally”. However, while some are inconvenient, not all neurological conditions are necessarily negative.

Synesthesia is a neurological condition in which real information in one sense is accompanied by a perception in another sense. For example, people with synesthesia may associate a particular number, say 5, with a particular color, say green. A person is a synesthete if the association perceived is constant, memorable, and involuntary meaning that the number 5 will always be associated with green and not with any other colors.
While this is an interesting condition, what is even more interesting is its biological basis. Scientists have proposed that synesthesia is the result of “cross-wiring” in the brain. By this logic, synesthetes have neurons that are “normally” a part of a specific sensory system interacting with those of a different system. What is even more interesting is that children appear to be born with these synesthetic connections as studies have revealed that infants respond to sensory stimuli in a synesthetic way. Scientists believe that children later lose these synesthetic connections because they are not reinforced in traditional teaching.

What are the advantages of synesthesia? It has long been proven that involving more than one sense into processing makes memory and learning more efficient. In Ancient Greece, orators employed a memorization technique called the “method of loci” in which they would practice associating certain parts of what they were trying to memorize with locations in real-life places. The introduction may be at the door, the first part in the living room, etc. In China, numbers are represented by symbols, thus giving them a visual element, which makes mathematics easier and more logical. Both intentionally and unintentionally, synesthetic processing has been successfully used throughout the course of humanity to speed up processing. 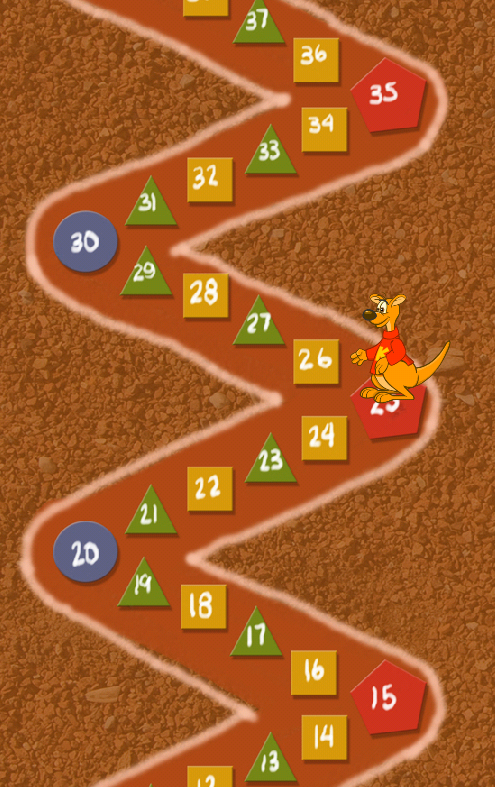 The Math Arrow games such as Kyle Counts use synesthetic elements to involve as much of the brain as possible in every game. To involve auditory cortex, enthusiastic voices read out the numbers to which Kyle is hopping in your choice of three languages. Children now associate the sound of a number with its value. For the visual cortex, there are various appealing elements. For example, odd numbers are always in triangles unless they are divisible by five, in which case they are in pentagons. The logical aspects of this are clear, children associate the image of a pentagon with numbers that are divisible by 5, giving them the subconscious knowledge that a pentagon has five sides while also visually representing a number in their heads and uniting all numbers on the Math Arrow that are also divisible by 5. Finally, the physical task of moving Kyle gives the game a kinesthetic element, in which certain distances between number tiles are worked into muscle memory.

The child playing the game is now using three separate senses to process information and giving the numbers that Kyle is hopping to characteristics that aren’t offered on paper and pencil. It is clear that while synesthesia may be a challenging condition to live with, the elements of synesthetic processing, as demonstrated by Math Arrow games, are very effective at ensuring maximum retention.