The highly-respected Real Clear Education has published an 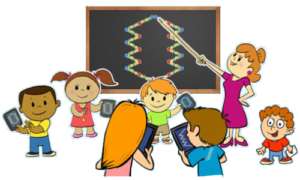 Leonardo da Vinci got it right.

I am not talking about some best-selling novel about secret codes or his 1480s sketch of a helicopter. Instead, I would argue that Leonardo’s drawing of the shaggy, spread-eagled “Virtruvian man,” which shows the symmetry of the human body, gives invaluable insights into how to teach arithmetic to children.

The drawing was based on the writing of the ancient Greek architect Virtuvius, who thought that human proportions provided an ideal for architecture. Of course, we can all picture the clean-cut, parallel lines of the Parthenon. But our central challenge today is not constructing edifices that can withstand the weight of stones; it is educating young people to cope with the weight of mastering math and science concepts.

Even da Vinci himself was unaware of how smart he truly was. Recent studies in neuroscience and education at Stanford University and Brigham Young University show that understanding symmetry opens up young minds to learning more. A few years ago, Stanford researchers wondered why it was so difficult for children to grasp the concept of negative numbers. Then, while experimenting with adults, they discovered something surprising: Even adults found it easier to name the midpoint of a positive and negative number if the two numbers were more symmetric around zero. In other words, adults can more quickly calculate the midpoint of +6 and -4 than they can +8 and -2.

The Stanford researchers discovered through fMRI scans that our brains prefer to deal in symmetry, and they began developing classroom tools that emphasize symmetry. From an evolutionary point of view, this makes sense. After all, our bodies are created through a process of cell division (though not all cells divide symmetrically), and among the first sights a newborn infant sees at birth is the relatively symmetrical face of a mother, father, nurse or doctor. We are imprinted with a tendency toward symmetry and can learn new concepts more quickly if we can detect an element of symmetry in them.

For children who love to move in the classroom, some teachers have designed dance lessons based on symmetry. Following John Dewey’s claim that “action is the test of comprehension,” the children are asked to pose and dance in a way that displays a line of symmetry. When ballerinas are performing pirouettes, they use the “spotting” technique (keeping eye contact with a set spot while they turn) and, at the last moment, rotate their heads to the same spot, to prevent dizziness. Because human bodies have “reflection symmetry,” spotting helps the dancer keep her balance. Through the physical and mental exertions of dance, children learn to visualize patterns and test their comprehension. This works with mathematical patterns too.

While visiting elementary schools throughout the country, I have found that younger students, between the ages of 6 and 10, often struggle with “skip counting,” if they are not starting at 0. (Skip-counting is counting by multiples of 2s, 3s, 4s, etc.). Children tend to merely memorize rather than understand why, when counting by 6s, 18 comes after 12. Researchers at Brigham Young examined a new design, the Math Arrow poster, which display pairs of numbers 0 to 100 in a symmetrical fashion, so that the number 10 appears directly across from 90, and the number 20 appears across from 80. The poster conveys the logic of the Base 10 system to children at a young age. The researchers found that by using a design that emphasizes symmetry children could learn to skip count starting at numbers other than zero. This helps ready them for multiplication, division and algebra.

Fresh methods of learning symmetry from Stanford, Brigham Young and from dance teachers around the country are engaging the brain in new ways. If the Vitruvian man could come to life today, I am sure he would not only be performing turns and twirls all over the La Scala stage, but educating children so that the future da Vinci’s of the world are able to skip count without relying on their fingers and will be ready to take up the challenge of STEM research in the 21st century.

Katherine Buchholz is a Research Fellow at Sproglit, LLC, an educational software company, and volunteers in elementary schools in the U.S. and U.K.